Blackjack has exciting variations that delight and delight the most demanding players as well as learners. In today’s article, we are going to describe a fast-paced variant that is a bit different from the traditional game, the Spanish Pontoon blackjack. On the tables of casinos around the world or in some online casinos you can play this variant. In the last years, the popularity of the game has exploded, so we explain what Spanish Blackjack Pontoon is: rules and strategy, in case you want to lend a hand.

How to get the Spanish Pontoon blackjack? Obtaining 21 points. However, any combination of cards is not valid. There are two types of winning combinations.

1- Pontoon is obtained when the player or the dealer gets a winning combination having an Ace and a ten point card (K, Q, J, 10).
2- Five card trick. In this case, it is enough to have a 5-card hand with 21 points or the closest to this number.

Like the traditional game, the objective is to win the bank. For this, the player must get the desired 21 points or get as close as possible to this number, without going over. In the event that the hand exceeds 21 points, the game is automatically lost. Each game the player beats only to the bench, never to any other player regardless of whether he plays in a physical or online casino.

It is played with 8 drops of 52 cards. Wildcards are not used. The value of the cards is the same as in traditional blackjack. Figures K, Q, J are worth 10 points, the Ace can be worth 1 or eleven points. The rest of the cards have the same value as they mark. Perhaps one of the best characteristics is that the house advantage is low, this being 99.66%. There is no maximum number of players, although 5 to 8 players are recommended.

It is obvious that to play this variant of blackjack it is necessary to find a physical or online casino that has the Spanish Blackjack Pontoon. The player then places a bet called a blind bet. The dealer deals two cards face up to the player, while he deals two cards to himself but face down. Both player and dealer can look at their cards.

In the event that the dealer has a Spanish Pontoon, he wins the game automatically, without giving the players the possibility to ask for a card or stand. And these, also lose automatically. If the dealer does not have 21 points, the game happens naturally. The player can request as many cards as necessary to reach 21 points without going over. Once his turn is over, the dealer shows his cards and conducts his game. The dealer can never be planted with less than 16 points. If he has 15 points, he is forced to ask for another card and take a risk.

Differences between Blackjack and the Spanish Pontoon

As in any game of chance, there is no perfect or winning formula that allows you to win. Following the game strategy is effective, but you can lose. However, it is important to know the game, its rules and methodologies to know how to win at blackjack. The more information and knowledge of the game, the greater the chances of hitting and winning. Here is a basic Blackjack Pontoon table: rules and strategy. 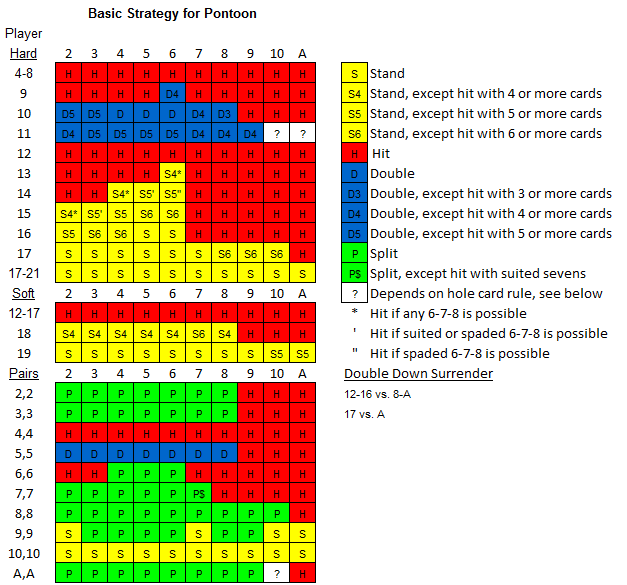 Learn more about others blackjack variants in this article.