In the eighteenth century there was a card game called Faro or Pharaon that had a rule called Paroli. In this game, when the player won and gave up on collecting the profit of the round, it meant that he bet that amount in the next round. For this you also had to fold one of the corners of a letter. Hence the term of the strategy Paroli in roulette, also known as Martingale invese.

The reverse Martingale betting method is much less risky and dangerous than the traditional Martingale strategy. For this reason it is used by some beginning players who want to play roulette and not spend a large sum of money. However, it is necessary to remember that there are no stable gains from using this type of strategy.

How to play the Paroli method efficiently

The money that is played is only the one that is obtained when winning a game to the bank?

Some players believe that using the reverse Martingale system is played with bank money. However, it is totally removed from reality. Casinos are gambling companies and their sole objective is to win money, the money of the players. For this reason it is absurd to believe that the player plays with the money from the bank. It is true that if you achieve a positive streak of four wins before a loss, of the 16 chips lost only one era of the player and the remaining 15 came from the bench. However, it is likely that before getting 4 positive rounds, you have been too many rounds without reaching 4 positive rounds. The summary is that you will continue playing to try to recover the money thanks to a successful progression.

So what is the number of successful progressions before returning to the initial bet? It will depend on the type of player. There are players who set the limit in six progressions. In this case, the winnings are very high but the chances of losing are also very high. There are many players who mark the number 3. It is true that the benefits are not as high, but it is easier to achieve objectives.

Below we describe you in the table that describes the odds of winning based on the number of progressions. The initial bet is 1. 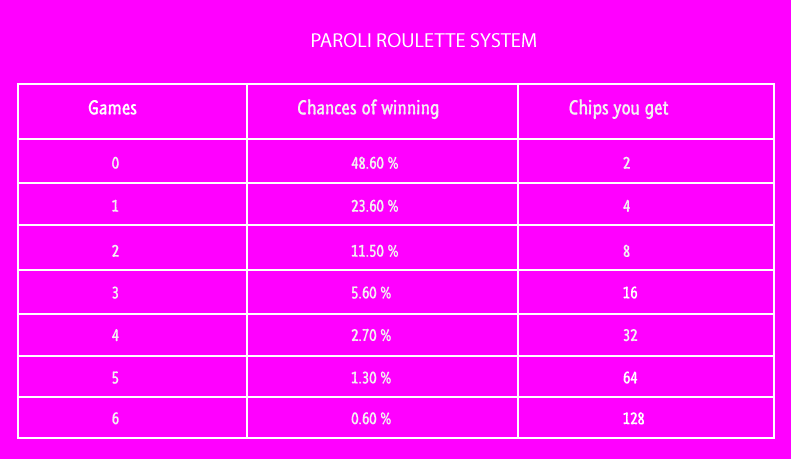 Long-term effectiveness of the Paroli strategy

In the long term with the Paroli or reverse Martingale strategy in roulette you will not get great benefits, but it is true that the losses will not be too high either. With this strategy you do not lose large amounts of money, since the stakes are usually low.

From Secret Casino Tips we recommend that before you opt for any of the roulette strategies you play in trial mode. Most casinos have the “Demo” option. That way you will be able to see if the strategy you want to follow is the right one. If you always lose in the trial version, change your strategy and don’t bet your real money. It is practically certain that you will lose.