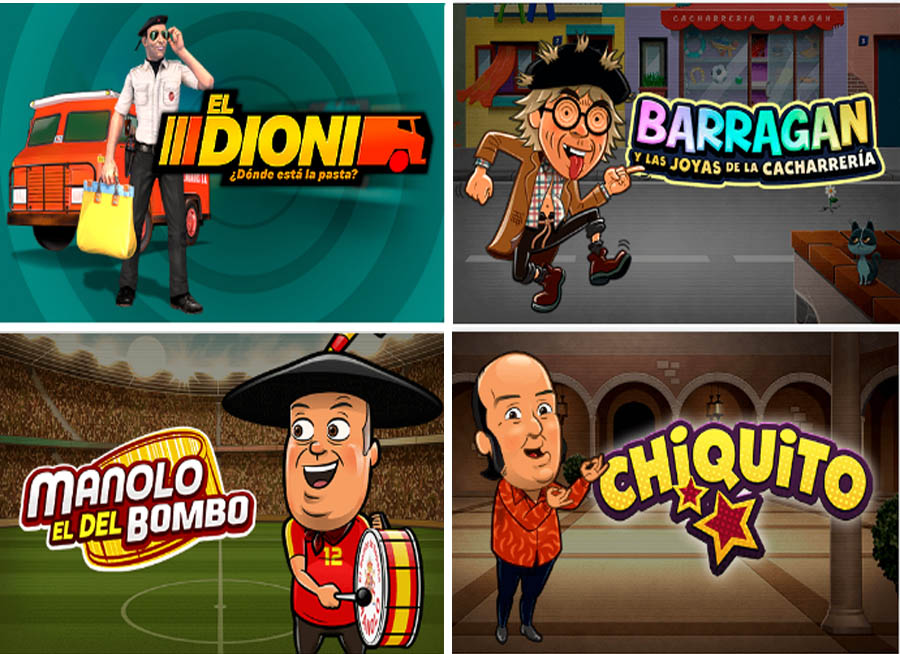 MGA is a game provider that has spent years betting on slot games with characters made in Spain. Popular characters in Spain there are many but only a few have managed to have their own slot game. Today we reel the 4 slot made in Spain from this Spanish company.

One of the most iconic characters on the small screen in the 1990s was Chiquito de la Calzada. Do you give up? Fistro, sinner, I do not tell you wheat for not calling you Rodigro, for the glory of my mother, you work less than the tailor of Tarzan,… they are just some of the most popular words or phrases of this Malaga humorist. The program that catapulted Chiquito to fame was Genio y Figura de Antena3 in 1994.

MGA Games was very insightful and quick to understand that a game with such a well-known character was going to have a brutal impact and was going to be very popular with users. The spectacular reception by the players has led to the existence of various slots: Chiquito ¡Al attackrrrr or Chiquito Fistro how much money!

If you want to enjoy any of the Chiquito games you can do it in Paston, Suertia, Mondobets, Luckia, Kirolbet or interwetten. In some of the casinos you can play this slot for free as a demo.

Regardless of whether you are a soccer fan or you hate it, the name of Manolo, the hype, you know for sure. And it is that this Castilian from La Mancha has been following the Spanish soccer team for decades wherever he goes. If there is something that sets it apart from other fans, it is its unmistakable bass drum. It is considered number 12 of the selection, and is that although I do not play on the field, it has a fundamental mission, that of encouraging “La Roja”.

The MGA Games slot consists of 16 symbols in which the traditional symbols of fruits and diamonds are mixed with some specific to soccer: the cup, the kick drum, Manolo himself, … Between the screens we can see this charming soccer player behind the bar of his bar, cheering in the stadium or in the locker room of the players.

To experience the maximum emotion of soccer at the hands of Manolo, the hype, you can do it in the following casinos: Paston, Suertia, Mondobets, Luckia, Kirolbet or interwetten. In one of these casinos you will have the opportunity to play this free slot before betting real money.

In 1989 Dionisio Rodríguez Martín, El Dioni, came to occupy all the headlines of the written and visual press by stealing an armored van with almost 300 million pesetas. He decided to get revenge on the company he worked for, Candi, when his salary was cut in half. After the coup, he traveled to Brazil, but luck in this case was not on his side and a short time later the Brazilian police arrested him. Of the 300 million pesetas that were stolen, only the police recovered 157 million. Where are the remaining 143 million pesetas? It is a mystery that El Dioni will take to the grave.

The software provider MGA Games opted for this character to recreate a fast-paced game and thus be able to circumvent security and the police, Dioni, where is the money? It has three reels and 1 to 8 lines of play.

If you want to commit a crime in a legal way, this is your slot. You can play in any of the online casinos that have MGA Games as a provider: Paston, Suertia, Mondobets, Luckia, Kirolbet, Interwetten. Play this free slot at one of the casinos and find out if you want to bet real money.

The absurd humor, a little raised of tone and something coarse are the unmistakable signs of Mr. Barragan. Along with his quirky somewhat scruffy outfit: he always wears an old dressing gown, ass glasses, and a beret. This character was one of the icons in the early nineties thanks to the program Don’t laugh, it’s worse. Although in reality who launched him to fame was Alfons Arús on the radio program Arús con leche.

The online gaming company MGA Games has two slots dedicated to Mr. Barragán: Barragán and the lost treasures of the park and Barragán and the jewels of the china shop. Any of the slots will delight the most nostalgic.

Enjoy this slot game is possible in: Paston, Suertia, Mondobets, Luckia, Kirolbet or interwetten. You can also enjoy this free slot before betting your money.

What do you think of these 4 slot made in Spain? Which characters should be privileged to have a custom MGA Games slot? So suddenly it seems to me that Lina Morgan or the mythical series like Blue Summer, the Serranos or Upon leaving class could have enough pull.