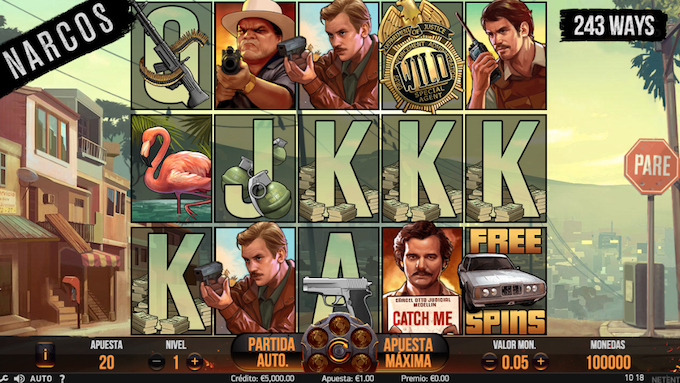 Top 5 Series Based Slots. Can you imagine being able to enjoy your favorite series on a slot machine? Feeling like one of the Peaky Blinders gang, being the Mother of Dragons or being the person who pulls the strings to unseat the National Currency and Stamp Factory of Spain, … Now it is possible.

In recent times the best game providers have developed fantastic and incredible slots based on series from Netflix, HBO, Prime, … Money Heist, Peaky Blinders, CSI Miami, Game of Thrones or Narcos have made history. And now slot fans can enjoy them.

If there is a Spanish series that has crossed borders and has achieved international success, it is without a doubt, Money Heist. The Professor and his students are ready for you to be one of the members of the band. Have you already decided which nickname-city is yours?

Money Heist is a classic-style slot launched in 2020. The most surprising thing is that it only has one pay line. However, Skywind Group has thought of everything, and that is that in each spin you can get fabulous prizes. The slot grants free spins and spins and special bonuses.

One of the British series with the most international projection is available for slot lovers thanks to Pragmatic Play. Peaky Blinders is inspired by a 1920s crime gang in Birmingham, England. Put on your suit, your beret and join the most feared and loved Gypsy-Irish clan of all time.

Peaky Blinders is a slot full of action, an exquisite character design and an unsurpassed quality in relation to the sound. It has 5 reels, 20 paylines and its RTP is 96.5%. The best are the extra features: wilds, scatters, free spins and the respin feature.

CSI Miami is an American series from the beginning of the 21st century that explores the world of crime and violence in the city of Miami. This crime series was watched by 73 million people around the world. So the success of the slot was more than assured. Do you dare to accompany Lieutenant Horatio Caine and Sergeant Calleigh Duquesne on their next investigation?

MGA Games, a Spanish provider, launched this slot in early 2020. It has 5 reels, 40 pay lines and an RTP of 90%. As a personal brand of MGA Games, CSI Miami slot has a superior and inferior game, and its fabulous 4 mini-games with which to win interesting prizes. It is surprising that it does not have free spins, but it does have wild cards.

Another series that has left a deep impression among its followers is Game of Thrones. Seven kingdoms and one objective, to achieve the longed-for Iron Throne after winning the Wars of Westeros. Become the mother of dragons, the fighter and persevering Arya Stark, the revolutionary Tyrion Lannister or the bastard Jon Snow. Which one do you prefer?

Microgaming launched Game of Thrones 15 Lines in January 2015. As the title indicates it has 15 pay lines and 5 reels. The RTP is 96% and a medium volatility. An incredible slot that has free spins, wilds and distribution symbols to satisfy the player. There is no jackpot, but the player can get incredible prizes.

Pablo Escobar. The greatest drug trafficker in history needs no introduction. The leader of the Medellín Cartel, Colombia, broke drug laws and frightened the Colombian people during the 1980s and early 1990s.

NetEnt decided to turn Pablo Escobar’s adventures into a slot game due to the resounding success of the series on Netflix. Narcos was launched in May 2019. It has 5 reels and 3 rows with 243 pay lines. Free spins and wilds to enhance player satisfaction. In addition to the other disparate symbols features, ‘Walking Wilds’, ‘Drive-by’ feature, or ‘Locked Up’.

Top 5 series-based slots, which one is your favorite?